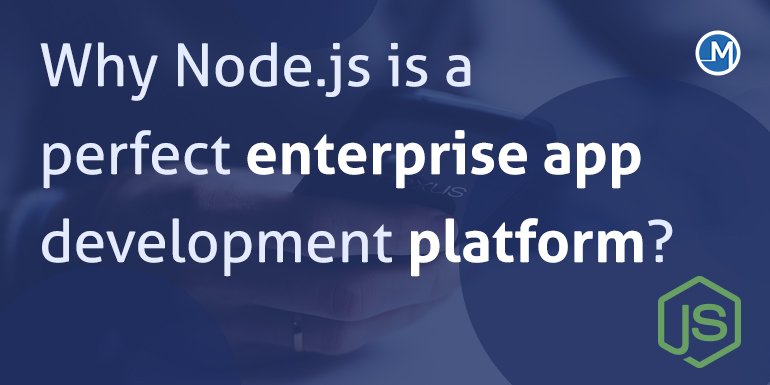 Why Node.js is a perfect enterprise app development platform?

As per the sources, Node.js is the largest open-source platform that exists today, with over 15 million downloads per month and more than a billion packages downloads per week.

The technologies are changing by leaps and bounds and forced enterprises to redesign their business processes. As the digital revolution has moved well in the form of convenient mobile app development that lets you book cab or order food from anywhere at any time to simplify lives.

Node.js is an open-source server environment built on Chrome’s V8 JavaScript engine; it enables the building and running of an application. This platform is a fast, scalable, and free way to execute code – it makes use of an event-driven I/O model, which is attributed to its efficiency and scalability.

Some of the benefits of Node.js include:

– Real-time apps can be built relatively fast on this platform
– A Node.js developer can code in JavaScript for the client and server-side using this platform
– The development process efficiency increases
– This platform executes code more swiftly than any language

The adoption of Node.js has increased significantly, giving enhancement to its active Node.js developer community who has added over 100,000 modules collectively.

Any programming language will give you enough and more good reasons as to why you should choose it over the others. Notwithstanding the popular notions, the case of Node.JS is different.

Node.js enables the development of full-scale applications. Futurist tooling and its modern way of developing complex applications have made this web app development platform stand tall among other programming technologies.

Node.js is built upon Google Chrome’s V8 runtime—written in C++, built for multiple operating systems and super fast. Both V8 and Node are frequently updated, with performance optimizations, security patches, and support for modern JavaScript features. The use of JavaScript also means that transforming JSON data—the most common data interchange format on the Web—is fast by default.

The single-threaded, event-driven architecture of Node.js allows it to handle multiple simultaneous connections efficiently. Most of the popular web platforms create an additional thread for each new request, using up RAM for the whole time it takes to process it. Node, on the other hand, operates on a single thread, making use of the event loop and callbacks for I/O operations, delegating tasks such as database operations as soon as possible. This allows it to handle hundreds of thousands or even a million concurrent connections.

What’s more, Node.js embraces scalability from the get-go, with powerful features such as the Cluster module enabling load balancing over multiple CPU cores. Robust tools, such as the PM2 process manager make it even easier to monitor, optimize and deploy Node applications.

The Node.js allows you to build cross-platform desktop apps on platforms like NW.js or Electron.

This allows you to reuse some of the code from the web app to the desktop version for Windows, macOS, and Linux.

Again, moving further the same team working on the web application can build a desktop app without possessing any expert knowledge or skills of Objective-C, C#, and other languages for native apps.

Moreover, Node developers have the privilege to access some of the great tools such as Google Chrome Developer Tools, which allows them to debug and profile desktop apps and back end efficiently on the client-side apps.

All the major Node developer tools are cross-platform. This means that developers don’t need a Windows machine for Windows apps, or a Mac to debug, build, and write a macOS app.

There’s a change in the users are consuming web and enterprise applications. Their needs are changing, and businesses need to evolve to adapt to their demands. UI/UX has become a significant part of an enterprise application. The way you represent action elements on an app, the way you collect data, the way you present data has had a significant shift. Less is more now, with the underlying factor that functionality is not compromised.

With Node.js this is quickly taken care of, and you can keep your clients happy by readily deploying their desired feature requests.

As Node.js is based on JavaScript, it does not have much of a learning curve. The syntax is similar and hence easy to grasp. It is accepted by Java as well as .NET developers worldwide. Programmers can learn, develop and deploy scalable apps using Node.js on Unix and Windows.

The Node package manager which is also known as the npm has now released its enterprise version to combat the security and privacy concerns of the big enterprises.

Npm assists the programmers to install, update, and utilize the minor open-source software packages also known as the modules.

This means that the programmers don’t need to write the common features from scratch. Moreover, it also allows them to avoid new layers of complexity.

The npm enterprise version is a boon for big organizations since they are worried about storing their data in the cloud. Npm enterprise allows them to run the infrastructure of the npm behind the company’s firewall.

It empowers the enterprise by giving them access to a private registry along with high-grade security features.

These features help them to identify vulnerabilities, control access to code, and automatic replacement of unsafe code.

Node.js focus on reusable RESTful APIs is one of the major features that make it the best platform for enterprise app development. This platform’s focus on RESTful APIs is the most adaptable way of developing software systems on a large scale.

This task is done with the help of APIs that connect to the back end and keep things efficient and light to handle large volumes of data.

When everything around us is changing so fast, somethings need to stick. Node.js is only 10 years old but provides Long Term Support. This provides organizations and developers with the reliability which is required if you’re basing your entire business on a particular technology.

Any major Node.js release will be maintained for 18 months (as promised by Node.js) from the time it is made as an LTS version. Post this, it will enter a 12-month period of maintenance. Here, no new additions will be made to its modules (features) and existing bugs and security issues will be identified and fixed.

Some major companies have relied on Node.js as their primary technology for building apps and services. Some of these are:

Conclusion
Node.js has established itself as a major platform for back end services. It has become the Connor McGregor of web and enterprise-level app building technologies and rightly so.

The architecture for Node.js suits perfectly for many enterprise-level applications that require high volumes of I/O operations with the Network, Disc or memory. Enterprise Apps such as Chat apps, Live Sports feed apps and more.

Nodejs has tons of benefits with faster time-to-market, fewer lines of code with higher performance. Serve MORE clients in LESS time with the same or lesser resources than a Java-based application.

With the LTS and community support built around it, Node.js is only going to grow from here.