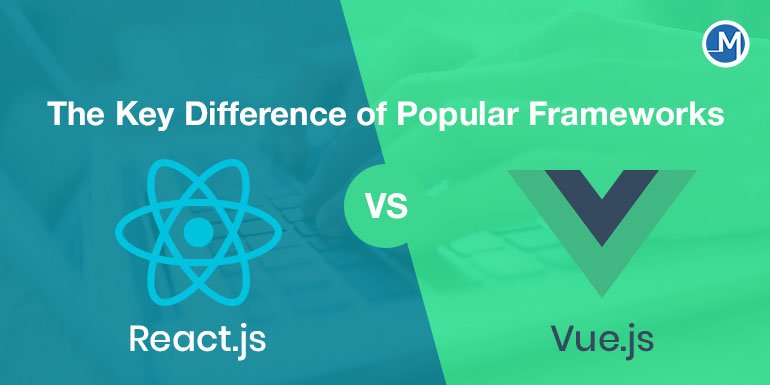 React.js vs Vue.js – The Key Difference of Popular Frameworks

Javascript initially used for client side language  but these days it also supports server side scripting as well.

JavaScript framework is an application framework written in JavaScript where the programmers can manipulate the functions and use them for their convenience.

These frameworks also make it possible for the programmer to code the application as a device responsive. This responsiveness is yet another reason why the JavaScript frameworks are quite popular when it comes to the question of using a high-level machine language. Let’s have a look at the best JS Frameworks in 2019.
– React
– Angular
– Vue
– Meteor
– Express
– Backbone.js

Vue and React are highly valued and widely used by numbers of people. They are the popular JavaScript frameworks that are mostly used by people. The Vue and react is also used for interface design.

React is created by Facebook and it makes it super easy to build interactive UIs.

For creating attractive and reusable UI components, React is the best library. The data that changes frequently and is represented by a component is suitable for React. The best thing about React is that it could be used for building reusable user interfaces. And it is possible by breaking the reusable interface into components.

A react application is made of multiple components, each responsible for rendering a small, reusable piece of HTML. Components can be nested within other components to allow complex applications to be built out of simple building blocks.

The use of JavaScript XML, or JSX, is presented by React. The JSX or the JavaScript XML is a syntax extension to JavaScript. The JSX is helpful in the creation of UI components and debugging, but it is not necessarily needed to React.

Developed by Evan You, Vue made its first public appearance in February 2014. Though initially used in China, the JavaScript framework is now globally recognized to be one of the best options for building intuitive web user interfaces as well as SPAs.

The popular open-source JavaScript framework is Vue.js. This framework is capable of developing single-page applications as well as for existing web development.

BuzzFeed, EuroNews, GitLab, Grammarly, Nintendo, and Trustpilot are some of the big names benefitting from VueJS.

– Vue acts as a template engine, not as a code.
– Vue and React, both could be plugged into any existing Web application.
– Plenty of tools and libraries are available for Vue as well as React.

Key distinction – React is a library, whereas Vue is a framework

There is much difference between React and Vue. But when it comes to state management, DOM manipulation, and component architecture, both do not show much difference. The best thing about React is that it offers a lot of freedom for the developers. But you get all the information from React whenever you want, but it does not prove you with the information on how to do it.

Vue, on the other hand, is more flexible than React and could also be faster than react. Vue includes smarter optimizations, which is better than react. The best thing about Vue is that they have their own template language, which could fit your needs. Some of the common to that of Vue is Vue CLI, Vue-router, and Vue for state management. It is not necessary for users to use these tools as there are some alternatives tools that are available. The core team build and supportedVue and react. Vue’s is enabled with the development and faster setup. The community has built plenty of third-party libraries and enriching its ecosystem through Vue.

Vue has the following advantages over React:

– it is smaller and faster;
– convenient templates simplify the process of developing;
– it is simpler in terms of syntax.

React has the following advantages over Vue:

Whether you choose Reactjs development or VueJS application development, both frameworks have no considerable differences and this decision is highly subjective based on your requirements.

But anyway, the best way to choose the best tool for resolving particular issues is to test different options. So, try them both to make a choice.