Why Flutter Is The Best App Development Platform For Enterprises

Over 100,000 apps were developed using Flutter SDK in the past couple of years. The user interface of Google Assistant was also built using the Flutter SDK. As compared to many of the other software development platforms, the Flutter SDK has become very popular in a very short time. With so many efficient and in-use apps developed with the help of Flutter, many other businesses want to use Flutter for its services and tools. If you are looking towards Flutter to create your business app, read about how Flutter helps enterprises and businesses. After reading this article, you will understand how your business will benefit from using Flutter.

Before you hire a flutter app developer, get your idea about Flutter straight first. That way, you will be able to find the right app developer with the right skill set.

Flutter is a unique software development kit or SDK pitched into Google’s software development landscape. The Flutter SDK creates an interactive interface for different operating systems like Android, iOS, Windows, or web browsers. The Flutter SDK is used to create apps on mobile phones and web-based platforms. The multifaceted use of Flutter is another reason why it is very popular among developers. A Flutter app development company can cater to different companies and fit into different needs required by different clients.

The Flutter platform is used to create apps for multiple platforms using a single code base so that modifications and improvements are easy to make. Since every app constantly updates its algorithm to stay relevant, this is an important feature. The framework of Flutter is updated from time to time so that the app developers can easily upgrade and create better apps.

The components of Flutter that make it efficient

The dart programming language is used to create feature-packed apps for users. The just-in-time execution engine of the Dart language makes the whole SDK efficient and helps create an optimal performance for different operating systems like MacOS, Android, web, etc. 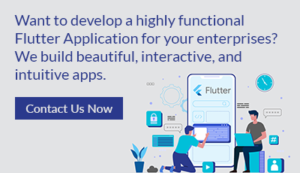 Why is Flutter SDK the great choice for enterprise app development?

There are many reasons why businesses prefer Flutter app development services. Here are the most valid reasons for businesses to prefer the use of Flutter SDK.

When a business hires third-party app developers to develop an app, it would want high productivity from the team. Productivity depends on the team, but it also depends on the efficiency of resources. With Flutter, you get better resource usage because Flutter does not need many resources. This way, the economical efficiency and productivity of the whole process increase. The platform is cost-effective and improves developers’ productivity with its tools and services. The developer can quicken the development pace and get more tasks done on Flutter.

When a business hires software developers for app development, it wants to hire the most experienced developers. It would want the resources to be available readily. As Flutter is based on Dart, an object-oriented language, it opens up a lot of human resources for the project. Most experienced software developers are acquainted with object-oriented languages and will be able to work with the Flutter SDK. This is a clear advantage for the business that taps into using Flutter.

Flutter SDK is very consistent in its performance. With Flutter, you get high-end and predictable performance every time the team uses it. The Dart language is used to create an interactive, intuitive, and highly productive app that maintains its performance. The apps run with seamless and high performance.

Also read: How Much Does It Cost To Design A Mobile App – Native Design Vs Custom Design

Another point that favors developers and businesses is the possibility of a functional-style flow paired with an inbuilt memory allocator, which helps allocate short-term memory for task finishes. This boosts the performance of the entire app to a higher level.

The single code base used by Flutter is an advantage for an enterprise app development company. The enterprise app should be adaptable and high-performance across multiple platforms. We use multiple devices today, and an app should be concurrent across different devices. The single code base development feature of Flutter is a great one for enterprises as the enterprise develops the code a single time. Then the code can be run on different platforms and multiple devices.

The single codebase makes it easy to foster cross-app development and bring new code improvements. The development process is quicker, simpler, and more productive with no separate codes for separate devices and platforms. The business also saves a lot of money. The code is easily deployed, and the business achieves its goal from app development. Time, effort and cost are saved with the use of the Flutter framework for development. If the business is on a tightrope to develop an MVP for the market, Flutter is a good option to start with. 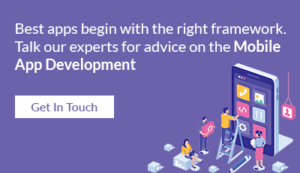 Today, enterprises do not wish to compromise with the performance side of the app. Development with the help of the flutter tool kit gives a near-native performance even to cross-platform apps. Enterprises can now create high-performance apps that work natively with multiple devices. This is necessary for wide-scale enterprises with a huge number of people working in the structure. The components Flutter uses to create apps give a native android and IOS feel to the app. The user does not have to face performance and usability issues across platforms.

There are many advantages of using Flutter for app development, and the scalable nature of the app is one. Developed applications on Flutter are highly scalable and can be used under differing conditions. It can be scaled to web browsers or desktops. The Flutter-based app can also be run on mobile devices. Depending on the workload and the user load, the app can scale its performance. The users will not face any performance lag issues or downtime. As enterprise apps are used for important business tasks, scalability and consistent performance are very important features.

The Flutter SDK provides various features and is ready-to-use plugins for app development. It is a simple platform where you will get every type of tool to create an app. The simplicity of using Flutter is a benefit for the business and the developers as it is very easy to modify and change the SDK. The code can be easily written and modified. The developer reduces his dependency on different resources and works with Flutter in a dedicated way. The developer can establish everything a native app can do and make changes without interfering with the native framework. Flutter SDK simplifies even the most complex tasks and processes.

The Flutter App development interface has an internal graphics engine that helps create a graphical interface for apps. The Skia graphic design engine helps maintain the integrity of layout and graphics for Flutter-developed apps across different platforms. The graphic design and UX design process are simplified and easy to master with the help of Skia. The development team does not have to worry about fine-tuning the layout or making later changes for concurrency. Highly creative designs are easily delivered with the help of Skia and Flutter engine. As users interact a lot with the UI, using innovative graphics engines such as Skia brings a new dimension to design.

One of the major advantages of Flutter is the speed at which code is written for development. Every company today wants to be the first to deploy its app in the market. Even with enterprise app development, the fast pace of development is very important. Flutter helps you speed up the development cycle and also reduces the number of resources needed for app development. The Hot reload feature is a unique one for Flutter that is of great use for the developer.

The developer can monitor the changes to the code and see the results reflected in real-time. The developer can, therefore, micro-manage the code and only make necessary changes. After development, the series of changes also happen very fast. Developers can fix bugs at a fast rate and also add more elements at a higher rate. Another way Flutter SDK quickens the pace of development and deployment is by allowing the designer and developer to collaborate.

When the team works with Flutter, the design and development phases can happen simultaneously on the same interface so that the app comes up streamlined. This increases the accuracy of the design and performance of the app. The multi-tasking collaborative interface of Flutter is a boon for the development team.

Not only Flutter, but the apps that are built with the SDK are faster than other apps. This is why most major app companies are using Flutter these days. The modern user does not have patience for slow apps. With enterprise-level apps also, businesses expect them to run at high speed. With high speed, more tasks can be done on the app. Therefore, Flutter, with its faster apps, is preferred. Flutter develops apps with features and a rich user experience. However, it also keeps the framework lightweight so the user can experience high speed. Using a fast Renderer and Dart programming language also helps boost the speed of the developed app. The silver layout model, which supports fast scrolling on the app and the custom UI widgets that developers can incorporate into the application, also helps create high-speed apps with superior features.

The code developed with the help of Flutter is very accurate, and there is not much testing to do. Moreover, since the Flutter SDK develops a single base code, the code does not have to go under repetitive testing cycles. This reduces the hassle of testing and helps create better apps that can be deployed faster. Developers have fewer things to worry about and have flexibility in the development process. The overall productivity and speed of the process are enhanced. The hot reload feature also helps eliminate bugs in real-time, reducing the load for testing and improvement.

All these features and benefits of the Flutter SDK make the SDK a leading choice of software development platform. Flutter is also coming up with new features and enhancements that will make your app even better for deployment. Flutter offers the best design and development to software developers. With the help of Flutter, experienced developers can create great apps. Enterprise-level apps need a good suite of tools for development and testing. With its many features, the Flutter SDK is the perfect choice for business purpose app development.

At Mobio Solutions, as a leading Mobile app development services provider, we create a flutter for startup app development. Our expert team of Flutter developers will guide you with strategic advice on the technology that fits best to startup solutions.