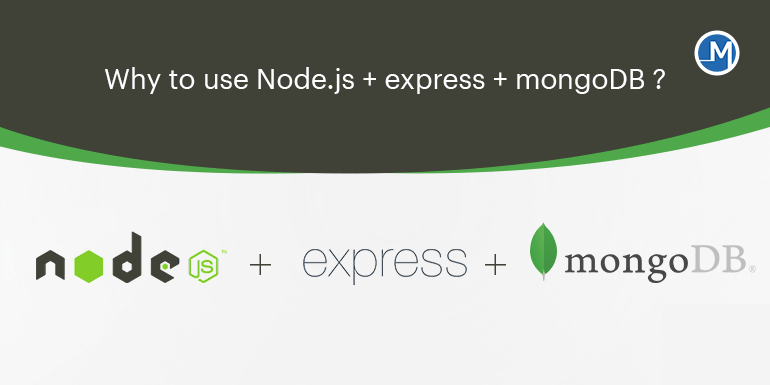 Why to use Node.js + express + mongoDB ?

Node.js is a JavaScript runtime built on Chrome’s V8 JavaScript engine. Node.js uses an event-driven, non-blocking I/O model that makes it lightweight and efficient. Node.js’ package ecosystem, npm, is the largest ecosystem of open source libraries in the world. Node is a fast C++-based JavaScript interpreter with bindings to the low-level Unix APIs for working with processes, files, network sockets, etc., and also to HTTP client and server APIs.

Node.js is actually not a framework, but a runtime environment that allows to execute JavaScript on the server side. Even though it was originally written in 2009 it wasn’t widely adopted until recently.

Why we are jumping on Node.js ?
1. Asynchronous I/O

Why should we use MongoDB?

MongoDB provides the persistence for your application data.Mongoose allows us to have access to the MongoDB commands for CRUD simply and easily.

MongoDB is an open-source, document database designed with both scalability and developer agility in mind. MongoDB bridges the gap between key-value stores, which are fast and scalable, and relational databases, which have rich functionality. Instead of storing data in rows and columns as one would with a relational database, MongoDB stores JSON documents in collections with dynamic schemas.

Mongo + Node is extremely popular when you need a fast and convenient development cycle,performing Mongo queries in Node is, as you mentioned, straight forward, Mongo is a key value store, so basically no type checkings stuff” – what I meant here by “key value store” was that there are no predefined types for values in general. you could first have a field be a string, then you could have it be an numeral.

Why should we use Express?

Express 3.x is a light-weight web application framework to help organize your web application into an MVC architecture on the server side. You can use a variety of choices for your templating language (like EJS, Jade, and Dust.js).