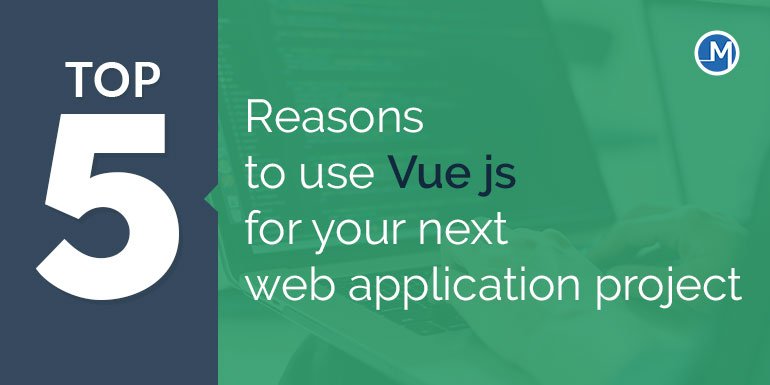 With over 1,51,825 stars on GitHub, Vuejs is one of the trendiest progressive Javascript frameworks, beating Angular and React star count by a fair margin.

Vue.js is a technology that you can use to build modern apps without using a lot of resources.

This article will explain the main benefits of the framework and shows why it could be a good choice for your next app development project.

Vue is incrementally adoptable & mainly focuses on the view layer. It is easy to integrate the framework into the existing project. Vue is a great choice if you want to build Single page applications (SPA) – combine it with modern tooling

Here are the reasons why you should use Vuejs for your next web application project.

Adding Vue to an existing web project is relatively simple. You can start coding very quickly without having to know anything about JSX, ES2015, or build systems to get started. As long as you are familiar with HTML and JavaScript, you can read their guide and build something basic within a day, which is a big advantage in a fast-paced development team where you may have to pick up something quickly.

The Vue documentation is very detailed, easy to understand, and includes various code examples. It also has a good, growing community of developers that can offer help when needed.

Vue is Flexible and scalable.

Of course, many developers are looking for advanced development features like ES or TypeScript transpilation, hot module replacement, and tree-shaking, made possible by build tools. Vue has you covered there as well.

This past year, the Vue core team re-wrote their command-line interface from the ground up, resulting in Vue CLI 3. It’s designed in such a way to promote best practices and a full-featured default Webpack configuration that should be easier to extend without making it difficult to upgrade, i.e., “no need to eject.” Vue CLI provides a ton of useful additional features, including an interactive project initialization wizard (available through the terminal or a web-based UI), a plugin system to support generators and configuration for community add-ons, and the ability to specify alternative build targets, like web components or as libraries.

Vue.js offers two-way communication because of its MVVM architecture. It allows handling HTML blocks easily. It is very near to Angular.js which also increase the speed of HTML blocks. This feature is also known as 2-way Binding, what that means is whatever changes you make in your UI is passed to your data and changes did your data is reflected in your UI.

Vue.js is also called Reactive because it reacts whenever your data is changed.

This is very different when compared to libraries like React.js which only supports one way communication.

Vue.js has become one of the most popularly used Javascript framework that make the job of the developers much easier to create cross-platform web applications. The framework combines the best features of Angular and ReactJS and so it can be said to be mature but very simple to use.