Home > Blog > Top 10 reasons to choose ReactJS for your next project. 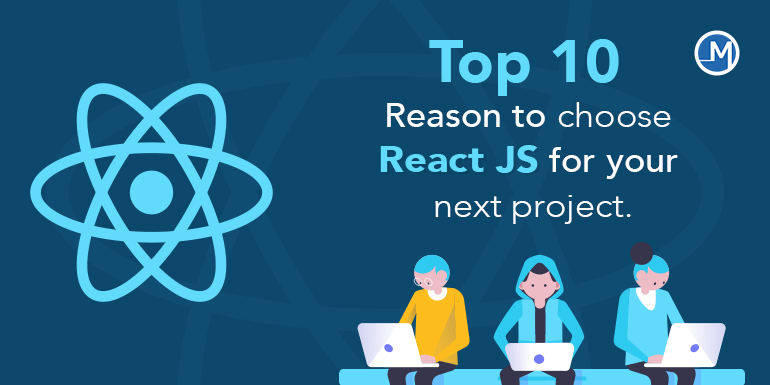 Top 10 reasons to choose ReactJS for your next project.

Top 10 reasons to choose ReactJS for your next project.

In the tech-driven arena, There are lots of front and technologies available like ReactJS,Vue.Js, Angular, etc. ReactJS is an open-source JavaScript library designed by Facebook for creating rich and engaging web apps. React.js development is used for fast and efficient programming with minimal coding.

Here are the top 10 reasons to use ReactJS:

React is a lightweight JS library created by facebook, that only deals with the view layer. It is not much complex, like other MVC frameworks such as Angular or Ember. Who knows Javascript can understand the basics and start development on web application after only a couple of days reading tutorials.

As the React tutorial ‘Thinking in React – React is, in our opinion, the premier way to build big, fast Web apps with JavaScript. It has scaled very well for us on Facebook and Instagram.’

It uses Virtual DOM that makes the app fast. It’s known as vDOM. While the user is interacting with Internet resources, new vDOM is being created. It will compare previous and recent versions, and it can detect when the data has changed if data got change than it will re-render or ignore some specific pieces of DOM.the vDOM will be built again. This is the main reason behind React’s high performance.

In angular, when we are developing a web app, you have to learn an internal process such as digest cycles? As developer Those details better be kept as internal process to provide a clean abstraction. Developer only needs to understand a component’s life cycles, states, and props to be useful in React to accomplish everything you need. React do not have any patterns or architecture like MV*, after all its, only about the view layer and you are free to design your app’s architecture in any way you see fit.

Still, there is one good architecture, that fits React really well called Flux/Redux. Flux architecture is introduced and maintained by Facebook, and they use it for their web applications.

Each component decides how it should be rendered. Each component has its own internal logic. This approach has some amazing results. This component-based structure helped us to build our large web app in an easier way.

You can reuse components anywhere you need. As a result,
(1) your app has a consistent look and feel,
(2) code reuse makes it easier to maintain and grow your codebase, and
(3) it is easier to develop your app.

Server-side rendering (SSR) is a popular technique for rendering a normally client-side only single page app (SPA) on the server and then sending a fully rendered page to the client. The client’s JavaScript bundle can then take over, and the SPA can operate as normal. One major benefit of using SSR is in having an app that can be crawled for its content even for crawlers that don’t execute JavaScript code. This can help with SEO and providing metadata to social media channels.SSR can also often help with performance because a fully loaded app is sent down from the server on the first request.

ReactJs and VueJs both can be a great choice when it comes to speed. In ReactJS, every time a component change, a re-render is triggered. If you do not want re-rendering, consider using PureComponents. Dependencies can be tracked automatically during rendering. It means that the system knows the components that require re-rendering after the state changes. ReactJS yields better performance.

Angular becomes slow when there are many users because anything in its scope changes. Besides, the digest cycle in AngularJS requires running multiple times before stabilizing if a user triggers an update. ReactJS does not experience this issue because it has a dependency tracking system that uses an async queuing.

Today is the era of first come and first serve. Most of the organizations are in search of the technologies that help in the completion of projects within the stipulated time and budget. React JS makes this task easier. With the use of the reusable components, it enables the developers to develop as well as maintain applications that offer a consistent look to the entire project.

What can be a good thing about react?

Developer toolset is another important factor when you are choosing a development platform. There are two great tools you should be aware of: React Developer Tools and Redux Developer Tools. Both can be installed as Chrome extensions.

React Developer Tools are great for inspecting react components within their tree and also great for observing their current props and states.

If you are using the Redux library, you should definitely take a look at Redux Developer Tools for Chrome. You can observe dispatched actions, current store states, and watch changes in stores. You can also dispatch actions or modify stores and see changes reflected your view instantly. Since all the updates are kept within the extension, time travel is even possible. You can record and go back to any state of your application for debugging purposes.

Search Engine Optimization has always been a top priority for all organizations. Every organization understands the importance of higher rankings on the top search engines for better success. With the use of the Node, the React JS can help in increasing the visibility of the websites on the major search engines.

One can find various reasons that make the React JS an optimum choice for enterprise organizations. Starting from the ease of development to the speed, it makes the task of the developers easy and helps in the development of efficient applications. The SEO-friendly and stability features of React JS are yet some other reasons that make it a good choice. Most of the Fortune 500 enterprise organizations are using React JS in order to avail of the competitive advantage and grow successful.

Server-side rendering (SSR) is one of the most popular techniques that is used to render the client-side only single page app over the server. It is then completely rendered to the client’s page. The JavaScript bundle of the client can then be taken over, and SPA operates as normal. SSR can help in providing the Metadata for the social media channels. SSR can even help in enhancing performance owing to the fully-loaded app that is sent down from the server on the very first request.

– React’s bonus for a mobile solution

Best of all, React JS can power mobile apps using React Native, an open-source mobile application framework used to develop applications for Android, iOS, and UWP by enabling developers to use React along with native platform capabilities. The importance of having a strong mobile presence can’t be stressed enough, and being able to make a mobile and web application simultaneously is a massive competitive advantage.

After the use of the ReactJS for the creation of web products, exploiting mobile apps by React Native seems to be simple. As React Native possesses a similar design pattern, the transition becomes much easier.

– ReactJS is great for businesses

There are many reasons why ReactJS is a good choice for enterprise organizations. From the speed and ease with which it allows developers to develop and maintain applications to its stability and SEO-friendly nature to excellent availability of React JS developers. Many Fortune 500 enterprise organizations have already turned this popular JavaScript library into a competitive advantage, and many more will surely join them in the near future.

Advantages and Disadvantages of React.JS

Conclusion
React JS has come at a good time helping the developers to build highly engaging web apps and user interfaces within quick time. It allows you to break down the components and create a single page application with less coding.

Moreover, the virtual DOM also integrates the performance and React JS is also known to be SEO friendly. You can develop large scale apps with frequently changing data. It is due to these major advantages that React JS has gained much spotlight.