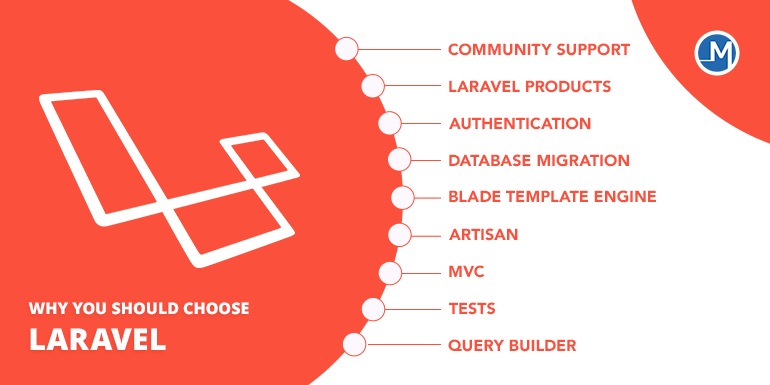 Laravel development services: Top reasons why you should choose Laravel.

Laravel is the modern-day widely accepted PHP frameworks with nearly 55k stars on GitHub, 124,336 questions asked on StackOverflow, around 50k followers on Twitter and 6k tweets. What makes laravel different from other PHP frameworks is that the key features provided by the laravel like Authentication, Migrations, Security etc.

The community support provided by laravel is much more as compared to other frameworks. Laravel has its own video tutorial series on Laracasts which helps you to understand the framework from basic to the expert level.

By-products developed by Laravel founders and community developers smoothens the development process. This ranges from packages for the development to the 2 minutes 1 click server deployment. Laravel has given some ready to use amazing products like Laravel Nova – Admin Panel, Laravel Vapour Serverless deployment with aws, direct support to Vue Js etc.

Laravel development provides the out of the box authentication and control access. While developers spend hours on writing the authentication process, laravel makes it easy. It is also easy to customize and gives you control of the access and roles.

Database migration is one of the most important and key features of laravel which saves a tremendous amount of developer’s time and rollback is the icing on the cake.

Artisan tool provided by laravel is one of the best time-saving tools you will ever come across. It provides the inbuilt commands as well as you can make your own customize commands.

MVC, adapted by laravel helps you in maintaining your logic and view properly with better performance.

Query Builder of laravel is super easy to use with many time-saving functions given by Laravel and also you can customize your own functions.